How do we best rehabilitate people with serious diseases, such as patients with breast cancer? Doctor Wouter Sabbe and his colleagues have been changing the way they rehabilitate oncology patients during the last year. Together with the oncology specialists & professors from VITAZ, UZA, and Maria Middelares Ghent, they have created test batteries to drastically improve the rehabilitation after chemo therapy.

Doctor Wouter Sabbe works at VITAZ in the department of Physical Medicine and Rehabilitation, tREV. Their hospital rehabilitation department has been working with evidence-based protocols when it comes to sports medicine for years, but they wanted to use such protocols outside of sports medicine as well. They used test sets to determine which kind of rehabilitation a patient needed after getting a hip or knee prosthesis. In 2020, VITAZ received a grant from Stichting tegen Kanker (a Belgian foundation against cancer) together with UZA & Maria Middelares Ghent to further integrate qualitative movement guidance in their continuum of care. 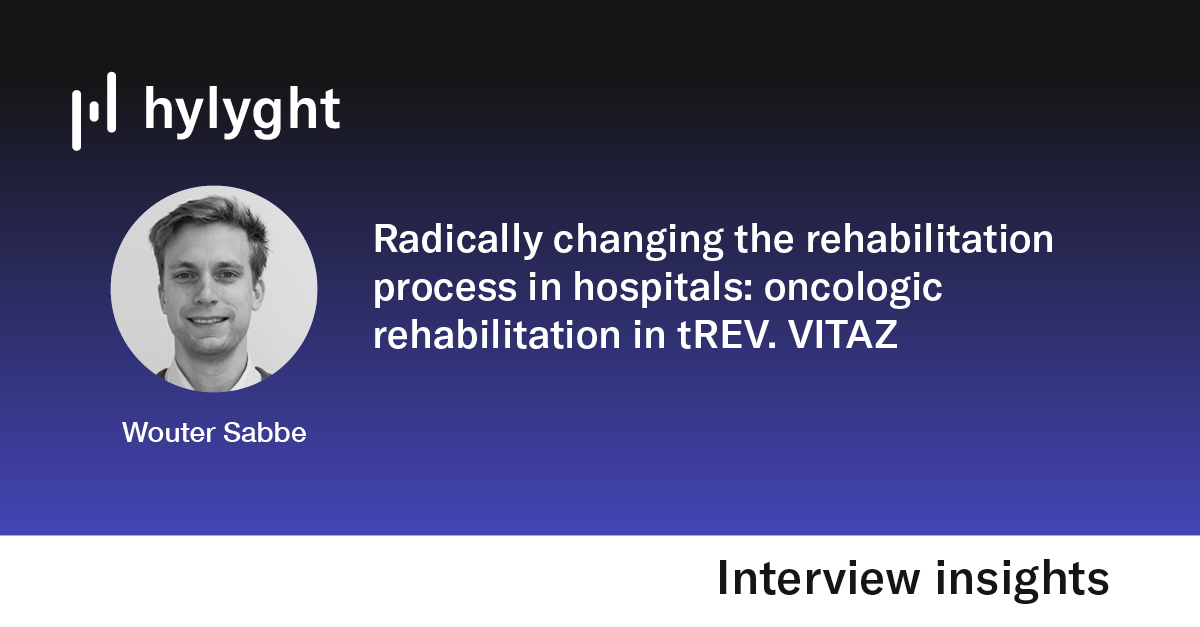 The project: Improving VO2 max during chemo therapy instead of going backwards

We interviewed Doctor Sabbe about their innovating project. At tREV. VITAZ, they are specialized in oncology care and they decided to improve the structure of their rehabilitation process. They had difficulty in creating test batteries & data collection protocols in their current software so we, at Hylyght, were happy to support them in this project.

Science has been working on reducing the mortality of cancer and has successfully decreased it by around 27% over the last 15 years. However, patients experience a reduced life quality due to the disease itself or because of the treatment. Research has shown that intensive physical therapy has a positive effect on the survival rate and also on the quality of life.

Here, you can find out more about the oncological support in different forms, amongst which is physical therapy, which VITAZ offers (this is in Dutch, but Google Translate can help you out). We’ll outline their process hereunder as well.

First of all, the patient is being tested by cardiologists with a cardiac stress test to measure the aerobe & anaerobe thresholds. Consequently, the patient’s strength, agility and endurance are measured. Daily functioning & the need for psychological support are also assessed through several validated questionnaires. These values are then compared to benchmarks from patients who have also undergone treatment. Only in this way is it possible to get a relevant assessment of how well/bad off a patient really is. As a next step, they create a training program for the patient. This training program is individualized based on the initial results of the tests. These results are assessed weekly when the patient comes to the hospital.

After the chemotherapy or other treatment, the tests are repeated to see how well the patient has progressed. During the pilot project at VITAZ with 10 participants who were diagnosed with breast cancer, they saw a mean 20% increase in VO2 max at the end of the training program. Instead of the usual 20-30% drop in endurance as shown in literature, patients actually increased their endurance during the rehabilitation of breast cancer during chemo therapy! The initial tests & training programs created for these patients were agreed upon by experts in their field. They will now conduct further studies into this test battery and try to implement it in more hospitals.

Dr. Sabbe has shared his experience and their project with other hospitals and they have expressed interest in setting up similar protocols. Dr. Sabbe’s advice is to make sure that enough time is spent on creating the protocol in collaboration & communication with different experts. Professors can help in establishing the best protocols, whereas the specialists and the physiotherapists need to be trained in conducting the screenings & tests in a rigorous manner.

Rehabilitation departments need to be able to measure effectively, store the data, and analyze how much progress is made. In the past, less time was spent on these processes but these become more important these days, says Dr. Sabbe. Fortunately, this oncology testing module that we have developed together with tREV. VITAZ, UZA, and Maria Middelares Ghent is also available for other hospitals. The experts who created this test battery want to have as many people as possible benefiting from this optimized rehabilitation process.

Dr. Sabbe appreciated that we collaborated on creating this test battery, mainly by allowing them to customize the platform to their needs and by giving some input where possible. Furthermore, the Hylyght software is much more modular & graphically appealing than most tools used in hospitals, says Dr. Sabbe. There are still a few flaws or bugs in our platform every now and then, but Dr. Sabbe appreciates the fact that they are solved very quickly. At Hylyght, we are quite proud to have been a (small) part in this innovative rehabilitation process of oncology patients.

Interest in a similar project?

If you are a hospital and would like to optimize your testing protocols or use a better tool to collect physical test or questionnaire data, store this data, and visualize the data from your patients, you can contact us.